Luis Angel came to Salon Salon in Rancho Santa Fe as a hairstylist. Less than a year later, he reopened the salon as Voilà Hair Atelier.

“I was ready to be an owner,” said Angel, who took over the salon in May and celebrated its grand opening in September. “I’m glad it happened now and not before. It allowed me to grow over all these years so I could do it right.”

“It’s a custom-made service,” said 44-year-old Angel, who lives in La Jolla. “We actually listen to our clients. The attention you want and seek, you get here. We make every client feel important.”

Born and raised in Havana, Cuba, Angel’s love of hair started at a young age. As a 14-year-old, he would follow his mother to the salon to observe stylists in action.

“I would go to the salons and see how they would cut hair,” he recalled. “I would go home and cut the hair of my mom, my sister, my friends. It followed me all my life.”

A decade later, Angel moved to Europe where he trained with Toni&Guy in London, learning how to cut and color hair. In 2001, he relocated to San Diego where he earned his U.S. license. He received additional training with Vidal Sassoon in Santa Monica and Martin Parsons of Los Angeles. He also attended make-up artistry training classes at the Institute in Burbank, where he received his Make-Up Designory.

He worked at salons in Scripps Ranch and Santaluz before coming to Salon Salon.

“I enjoy Rancho Santa Fe because it’s all about people wanting to look glamorous,” Angel said. “That is my style. I’m not into funky and crazy blue, purple, green. I’m more into natural, sophisticated, elegant looks.

“I also enjoy the fact that you get to know many people in this area,” he added. “You get to meet celebrities, business people, musicians, entrepreneurs, philanthropists. It’s an interesting place. And you get to connect with a person for one, two, three hours.”

Currently, nine of the 13 stations at Voilà Hair Atelier are filled. Angel plans to add another station. Once all 14 stations are filled, he hopes to launch a chain of salons across the U.S., targeting the middle class.

“I’m able to change people’s lives,” he said. “People can feel sad, depressed when they come. After you do their cut, color and makeup, they leave happy. It’s fun to see.” 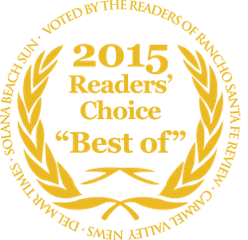